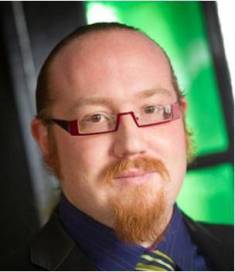 Mark Algee-Hewitt’s research focuses on the eighteenth and early nineteenth centuries in England and Germany and seeks to combine literary criticism with digital and quantitative analyses of literary texts. In particular he is interested in the history of aesthetic theory and the development and transmission of aesthetic and philosophic concepts during the Enlightenment and Romantic periods. He is also interested in the relationship between aesthetic theory and the poetry of the long eighteenth century.  Although his primary background is in English literature, he also has a degree in computer science. As the co-associate research director of the Stanford Literary Lab, he is working to bring his interests in quantitative analysis, digital humanities and eighteenth-century literature to bear on a number of new collaborative projects. His current book project, The Afterlife of the Sublime, explores the history of the sublime by tracing its discursive patterns through over 11,000 texts from the long eighteenth century, seeking clues to the disappearance of the term at the end of the Romantic period. As a Mellon Postdoctoral Fellow at McGill University, working with the Interacting with Print Research group, Dr. Algee-Hewitt was also involved in a variety of projects that combine literary interpretation with quantitative analysis. He is a co-coordinator of the Book History BiblioGraph, a new dynamic online resource and recommendation engine that visualizes connections between contemporary resources on Book History using statistical methods. He is also working with Andrew Piper on the Werther Topologies: a project that seeks to identify lexical patterns that will aid in tracing the impact of Goethe’s Sorrows of Young Werther on the nineteenth-century development of the German novel. Dr. Algee-Hewitt has taught a variety of courses in literary history and theory in both the English and German departments at McGill University, Rutgers University and New York University where he received his PhD in 2008.

How does the discourse of race stabilize around different ethnic groups in different contexts in American long-form fiction? And how do these individual discourses change over time? As cultural objects, novels offer a unique point of contact with our social constructions of human racial and ethnic difference and the complex history of immigration in America has played out in the writing of American novels in ways that serve to both reinforce and resist specific configurations of identity. Drawing on 18,000 works of American Fiction (in the new Gale American Fiction bibliography), this project seeks to probe the language of race and ethnicity in American literature over two centuries, from Washington’s inaguaration in 1789 to the passage of key parts the Civil Rights act in 1964. Through a detailed investigation into the specific configuration of language surrounding terms of identity, as well as novels that take various ethnic identities as their subject, this project explores the tension between the background discourse of race (the racial unconscious) and the ways in which individual characters react against (or with) the generalized language of ethnicity or ancestry. Keynote Title:  Future Web: Co-shaping our Identities
Abstract:
Digital humanities today is a vast, interdisciplinary field covering many different methods and understandings. Its object of study is just as often the distant past as it is contemporary culture. Increasingly engaged with computer science, digital humanities focuses on the development and use of digital tools and research methods to understand human experience and expression, especially through analysis, modeling, and manipulation of digital data. As new analytical possibilities have been developed, the focus in digital humanities has broadened. Data in the humanities can take many forms. Digital humanities asks fundamental questions about whether the analysis and manipulation of digital data can help to make greater sense of human society’s cultural production and behavior. A contemporary theme running through digital humanities is how new knowledge practices are being opened up by ‘big data’ and data aggregation.
This talk focuses on biographical data, one of the most complex categories to address. Biography is just one of many disciplines that have been deeply influenced by advances in digital media and computing, and that have required new theoretical approaches to help understand the changes. Yet the digital revolution has arguably had a more profound effect on biography and life writing than on any other branch of literature, perhaps any branch of the arts. At the intersection of biography and digital humanities, key questions can be posed: In what ways does the Web act to co-shape our identities? Do we know ourselves, each other, or historical actors differently? How permanent are the digital records of lives that are being produced? Do we, or will we soon, remember differently? And, what are the research futures for digital biographical research? Head of the Centre for Digital Scholarship - Bodleian Libraries

Pip Willcox is the Head of the Centre for Digital Scholarship at the Bodleian Libraries, and a Senior Researcher at the University of Oxford e-Research Centre. With a background in scholarly editing and book history, she is an advocate for engaging new audiences with multidisciplinary scholarship and library collections using digital methods and technologies. At the e-Research Centre, her work includes the Fusing Audio and Semantic Technologies for Intelligent Music Production and Consumption and SOCIAM: The Theory and Practice of Social Machines projects.

She serves on the Text Encoding Initiative Consortium Board of Directors and the Advisory Board for Digital Renaissance Editions. She co-directs the annual Digital Humanities at Oxford Summer School convening its introductory workshop strand, and the TORCH Critical Visualization network.

Workshop Topic: How to create a digital edition: a beginner’s guide to the Text Encoding Initiative (TEI). Glen Worthey has been Digital Humanities Librarian in the Stanford University Libraries since 1997, and helps lead the Libraries’ new Center for Interdisciplinary Digital Research (CIDR).  He hosted the international “Digital Humanities 2011” conference at Stanford, serves on the Steering Committee for the Alliance of Digital Humanities Organizations (ADHO), and is a convener of its “DH in Libraries” Special Interest Group.   Glen’s work is focused on the selection, creation, and curation of digital resources for humanities research and teaching at Stanford, and he is a founding member of the Stanford Literary Lab.  His academic background is in Russian literature (in which he is ABD at the University of California, Berkeley).

Special note of thanks to the organisers and designers of the dh2016.adho.org website. We have based our conference site on the same easy to navigate Wordpress template and structure.